Vibrational, Stunning Architecture by a Friend of Mine 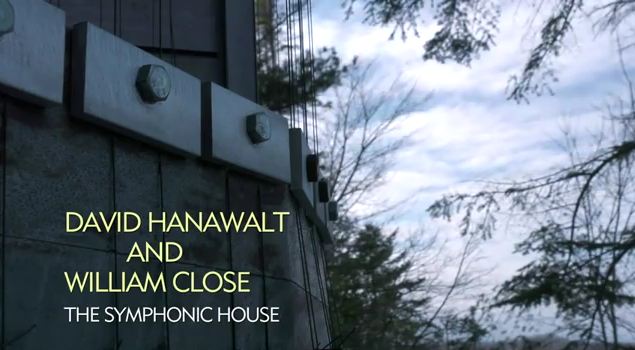 “We’re building an idea…it’s a house but in fact it’s a built idea.  And the idea is that it’s a container of vibrations…whether there are people moving through it, or music, or environment, it’s a vibration in the landscape.”   David Hannawalt, AIA

I met David Hannawalt, AIA a few years ago in Traverse City, Michigan and fell in love with his sensitivity, ideas and work which touches the face of the fabric of our existence and becomes a friend with it to create delight.

David’s work brings alive the quote “Architecture is Like Frozen Music.”*  If you study Geothe, his colleagues in the 19th Century, their quest for the connections between human, vibration, light, sound and color, you’ll begin to understand that nothing is ever frozen but always changing and alive.  To the ancient Egyptians, Greeks and Chinese, everything is alive and interconnected.

David’s work creates a pathway to richer realms of experiencing our built environment and its interface with nature and human on a subtle, intangible but very powerful realm.  With his help, we are beginning to pierce the veil of ignorance and that allows us access to more beauty, joy and creativity by pursing architecture and design in this way.

David and William Close designed and built the Symphonic House.  Mercedes Benz TV featured David’s work, and you can get a feeling of just how exquisite the interface between music, vibration, architecture and human living environment can become.  Watch the video:

When most people look at a wine tasting pavilion, an office building or a house, they see a collection of rooms. They see a bedroom here, an office there, but when David Hanawalt, a Northern Michigan architect, who honed his style on the buildings of Paris, New York and San Francisco, looks at a building he sees solutions.
He sees the needs of his clients answered in the form of what we call, a building. To him they are “organic mixes of spaces grouped in the different ways in which they are used. I see them as a built idea. The idea, is a container of vibrations, whether there are people moving thorough it, or music, or environment, it’s a vibration in the landscape.”
For the Symphonic House, he combined the location and the forces of nature that prevail upon it. He then transformed these forces into musical harmonies, using the house as his resonator.
He chose to work with William Close who quite literally uses the Earth as his instrument. William, a Malibu based artist, creates and plays Earth and architectural instruments. He created the Earth harp where he strung eight 1000-foot metal strings across a valley and played them as an instrument. He has done many architectural musical installations around the world. He is always looking for a way “to turn the architecture itself into a musical instrument.” He transformed the Symphonic House into a gigantic harp that resonates the magical music of the Earth itself.
Find out more about the Symphonic House /http://www.symphonichouse.com./), David Hanawalt (http://www.bluprince.com/) and William Close (http://earthharp.wordpress.com/about./).
Production Just a Guy Named Pete / Director Pete Erickson / Post FishSoup Films / Music William Close

*The phrase “Architecture is like frozen music” [Baukunst eine  erstarrte Musik nenne] is first used by Goethe in “Conversations with  Eckerman” (published 1836); however it appears earlier in Schelling’s Philosophy of Art (published 1802-3).  [Source: Wiki:Answers.com]